Posted on January 9, 2017 by Gillian Galicia 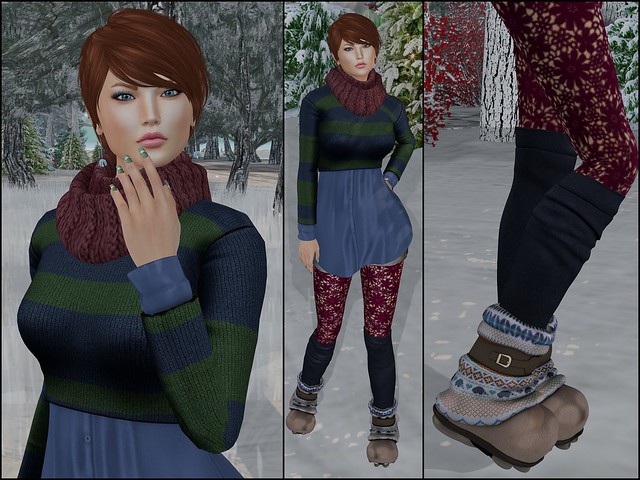 Today is Eclectic Mishmash Monday (in my world, anyway) and I’m featuring bit of this and that from here and there. I popped over to Designer Showcase, where they have some anniversary celebrations going on. While at the Entice booth picking up the gift nails, I also chose one of the Prep School Blues top. I love the green and blue! Although, the pattern is called Drab Stripe, so I don’t know what that says about me. My scarf is a pretty snood (love that word!) from Raindale. Versatile with a colour-change HUD. The skirt that you can barely see is an awesome one: the Demi Skirt from RealEvil. I’ve got legwear out the whazoo today with tights from G Field, socks from paper.arrow, and the most adorable boots ever from #187# that can be found at The Chapter Four. It’s worthwhile to join the Truth VIP group. For one measly group fee, you get monthly group gifts! I’m wearing one (!) of the January gifts, a lovely pixie cut called Gaea. Happy Monday!
♥Gillian

I'm a Canadian woman taking in the fashion of Second Life. If I meet a new friend or have a few laughs, all the better!
View all posts by Gillian Galicia →
This entry was posted in Fashion and tagged #187#, CoLLisions, Designer Showcase, Entice, G Field, Mesange, paper.arrow, Raindale, RealEvil, The Chapter Four, Truth. Bookmark the permalink.